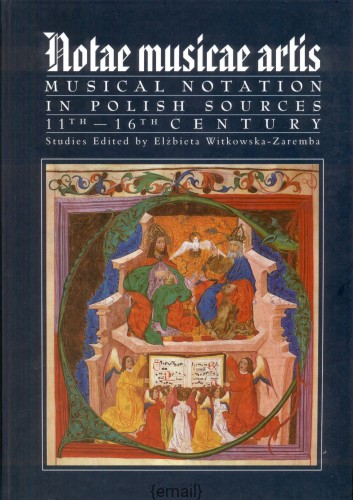 The source material for the six studies presented in this volume is provided by manuscripts preserved in Polish libraries, in the period from the eleventh to the sixteenth century. They contain records of vocal music, created for practical purposes, as well as theoretical treatises, which contain diagrams providing a conceptual framework for the musical phenomena as their integral part. Work carried out on the extant source collections in Poland has made it possible to evaluate the state of their documentation . This is a matter of particular importance in the case of liturgical manuscripts. At present one can estimate that Polish holdings still contain about a thousand manuscripts (both complete volumes and fragments) transmitting the Gregorian chant. Efforts undertaken in the postwar years have brought rich results in the form of published catalogues of liturgical manuscripts, and an impressive collection of microfilms built up by the National Library in Warsaw. However, a large proportion of notated liturgical books still remains beyond the reach of such documentation, which causes significant difficulties in conducting a palaeographical analysis of chant manuscripts. Thus, research carried out in this, the most numerous, category of sources, of necessity took the form of a survey.

The musical notation of the manuscripts under discussion for the most part fits within the framework of notational systems familiar from the West European sources. (...)

The facsimiles presented in this volume form a part of photographic documentation undertaken as an aspect of the planned research programme. They are merely a tiny fragment of the wealth of the chirographic musical culture of Poland. This wealth results not only from the graphic form and the ornamentation of the writing, but - more significantly   from the simultaneous functioning of various types of musical notation, sometimes within the same codex, and from a peculiar form of anachrony, where notational systems, which from the point of view of the modern musical historiography are separated by centuries, co-exist side by side.

The palaeographic features of the oldest relics of musical writing in Polish collections - the liturgical books preserved in full or in fragments which transmit Gregorian chant using staffless neumes (in campo aperto)  (...) Nino Albarosa has analysed in penetrating detail 24 (four of these only noted in catalogues) transmissions of this kind, concentrating on the graphic features of neumatic notation, in accordance with the requirements of classical musical palaeography. A comparison of fragments of various provenance - unquestionably foreign and hypothetically native (Plock, Kraków, Silesia) - allows one to examine more closely the process of assimilating those Western notational styles which formed the basis on which the typically local features developed.

The typology of local features within the framework of the staff plainchant notation in Polish sources is the subject of the pioneering study by Janka Szendrei. The author takes into account extensive source material, encompassing over 170 liturgical manuscripts, mainly of Central European provenance. On that basis she distinguishes eight types of notation in Polish sources, illustrated by 45 examples. Out of the eight types of notation, two - the Silesian notation (Wrocław) and Tyniec notation - show typically local palaeographic features. Janka Szendrei is very careful in formulating her conclusions, being aware of the limitations imposed by the nature of the documentation. Her comments regarding the earliest relics of staff notation in Poland are thus all the more valuable. The documents in question are the entry of the responsorium O pastor apostolice originating from Gniezno, and the record, previously unknown in musicological literature, of a fragment of Genealogy according to St Matthew preserved in the so-called Anastasia's Evangelistarium.

The study by Tadeusz Maciejewski is devoted to the elements of mensural system in the notation of liturgical monophony. Here the focal point is not so much the graphic features of the notation, as those of its elements which serve to organize musical time. Within the source material studied the author distinguishes three methods of rhythm notation: a) appropriate configuration of neumatic signs; b) insertion of mensural signs into plainchant notation; c) pure mensural notation. Tadeusz Maciejewski analyses in detail works (tropes, sequences and parts of the Mass) preserved in manuscripts originating from different periods and environments, looking at the question of recording note duration in the context of music treatises belonging to the period, and the relationship between the music and the verbal text at the level of prosody and versification.

The organization of musical time is also the central problem in the study by Paweł Gancarczyk, devoted to plainchant polyphony. Within this category are included polyphonic settings notated either in pure or contaminated plainchant notation, the latter resulting from combining neumatic and mensural signs. The author takes into account all the known transmissions of this type of composition in Poland, as well as expanding the current state of knowledge by new discoveries . The repertory studied includes compositions with a liturgical purpose (from two voice organa to four voice counterpoint), which have strong links with the local tradition of Silesia and Małopolska, and pieces with a didactic purpose, included in plainchant treatises (e.g. Sebastian of Felsztyn) or serving as musical decoration of theoretical arguments (e.g. in the treatises by Georgius Libanus). The type of notation is thus regarded as the common element for repertory which varies in respect of style and function: it was a notation which offered a clearly legible system of signs, which did not demand specialized musical education, and which was free of the complications relating to musica mensuralis.

The system of mensural notation and its practical aspect - the compositions contained in the sources of Polish provenance or linked to Poland - is the subject of the study presented by Elzbieta Zwolińska. The author examines particular elements of that system, tracing consecutive phases of its development (motet notation, black notation, white notation, mensural elements in tabulatures) and referring them to the categories of orthography and grammar. The source material includes transmissions written over a period of four centuries and mostly familiar from earlier studies. A detailed analysis of the notation, however, has made it possible to introduce numerous corrections and fill in the missing elements: an achievement all the more valuable since it concerns material central to the work of a number of generations of scholars studying early music.