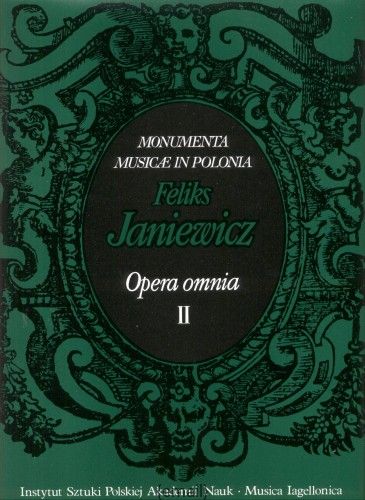 This volume of Felix Janiewicz's complete works includes his biography, a short description of his compositions, a Thematic Catalogue of his works, and the text of two his violin concertos.

The Thematic Catalogue presents all the composer's known works, his arrangements of other composers' works, and information about his lost compositions. The Catalogue includes approximate dates of the origin, the incipits of the compositions (in the case of larger works - the incipit of each movement). By each item the full text of the title page of each edition and its approximate date is given. The text of the title pages presented here indicates the original division of lines, which are marked by upright strokes, as well as the original typeface, i.e., Roman characters, italics, capital and small letters. The prints of Janiewicz's works are preserved in small number of copies, so in the Thematic Catalogue the places where they may be found are given. At the end of each item there are remarks concerning the work. Usually they are references to other works by Janiewicz. The basic sources for the present edition are the prints of both concertos, which have been preserved only in single copies. The place where they are kept and a description of each edition is provided in the Thematic Catalogue and the Editorial Notes at the back of this volume. Both compositions, although printed several times during the composer's lifetime, were not published after his death.