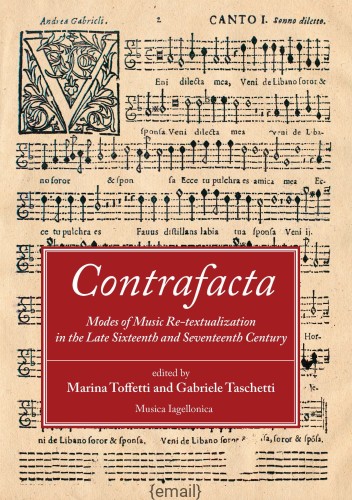 The present volume offers a reflection on the phenomenon of the re-textualization of vocal music in the 16th and 17th century. Its main object of investigation is the contrafactum, an intertextual artifact par excellence that is studied here from multiple points of view.
The first part of the book examines some procedures of textual substitution ­carried out in various parts of Europe by poets, literati, men of culture, or culturally ­updated members of the clergy, who produced highly refined contrafacta.
The second part deals with the adaptation of texts dictated by necessities of ­various kinds (celebratory, political, confessional), often made in a hasty manner and ­re-using pre-existing vocal compositions, but still able to reveal significant aspects of the history of religious culture in Europe at the time of the Reformations.
Furthermore, it represents a useful work tool for anyone wishing to carry on the research into the European assimilation of the secular vocal forms in the Italian language, by making available to the reader a description of the contents of most printed collections including contrafacta published in Europe between 1576 and 1649.

The full pdf version of the book is available free at the link below.

Marina Toffetti (ed.): Studies on the reception of Italian music in central-eastern Europe in the 16th and 17th century

Marina Toffetti (ed.): Studies on the reception of Italian music in central-eastern Europe in the 16th and 17th century

The present volume focuses on three main themes: the dissemination of Italian music in central-eastern Europe, faithfully reflected in the numerous historical inventories of music items kept in ecclesiastic institutions of the area under consideration; the migration of musicians and composers; and the adaptation and assimilation of style and compositional techniques of Italian origin, suitably modified depending on the performing conditions of the different geo-cultural contexts.