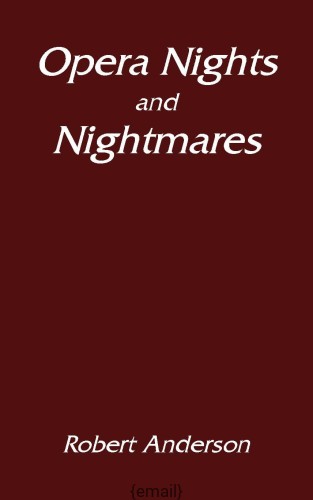 Robert Anderson studied Classics and Egyptology at Cambridge, England. During his time there the library of the music department was next door to that of Egyptology. This involved much lingering in the former and slow progress towards the latter. Eventually the music librarian, who was a good friend of the founder and editor of Record News, claimed that this visitor from other disciplines knew more about Bach than anyone else he had come across in Cambridge, where he had also started conducting. The result was a suggestion that he might like to review for the magazine, and possibly become its assistant editor. The offer proved timely, as Coptic research had just reached a natural conclusion, with translation into English of the life and writings of the Egyptian monk, St. Shenoute, a project since published.

Opera did not feature much in those early years of reviewing, but concerts and innumerable recordings did. There was also much chamber music as both pianist and cellist. Among the players was a German refugee violinist, who spoke glowingly of the music department at Gordonstoun School, where he happened to teach. By a series of strange coincidences, while on holiday in the Shetland Islands, Dr Anderson was asked by the headmaster of Gordonstoun if he too would be willing to join the Gordonstoun staff for a brief period. Again a new and unexpected experience beckoned. Classics was initially combined with music until he was appointed Director of Music, and resurrected the local Moray Choral Union.

Six years later he was back in London via Menotti’s Festival at Spoleto. Chamber music reached new heights because of friendship with the cellist Jacqueline du Pré, and conducting led gradually towards the Albert Hall in company with his choral society and major London orchestras. Opera reviews gathered pace, as did concentrated work on the Elgar Complete Edition. When approaching what seemed a reasonable age to give up conducting, his continued interest in Egyptology, Classics and Music has led to a lengthening series of books, of which this is the tenth.