Witold Lutosławski: Correspondence with his Western Publishers and Managers 1966–1994: Edited by Zbigniew Skowron 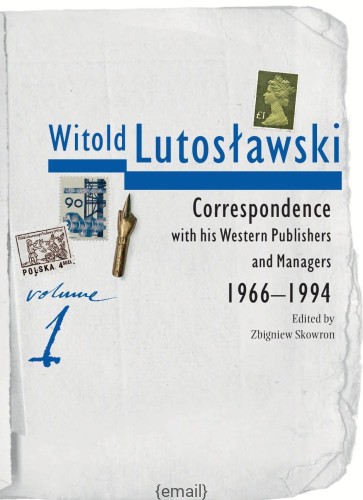 Two volumes of correspondence between Lutosławski and his Western Publishers and Managers, edited and published in English by Professor Zbigniew Skowron.

The unique testimony of Lutosławski’s contacts and co-operation with J. & W. Chester and Wilhelm Hansen Musik-Forlag remains his correspondence with these two firms from the years 1966–1994, which is now kept at the Paul Sacher Archive in Basel. (Sammlung Lutosławski). These letters reflect all aspects of Lutosławski’s artistic activity both in European musical life and in the musical centres of the United States, Japan and Australia. [...] In his correspondence with J. & W. Chester there are letters (mostly typescripts) which Lutosławski exchanged with the successive managing directors, namely: George Rizza (27 November 1967 [letter no. 19] – 25 November 1972 [letter no. 241]), Robin Boyle (14 November 1972 [letter no. 238] – 10 September 1993 [letter no. 983]), his assistant and promotions manager – Sheila MacCrindle (30 January 1973 [letter no. 250] – 22 March 1991 [letter no. 969]), and with James Rushton (8 November 1985 [letter no. 873] – 31 January 1994 [letter no. 989]). The correspondence with those four people, which include letters addressed not only to Lutosławski, but also to his wife Danuta, constitutes the main part of the present collection.
The present collection not only reveals Lutosławski’s behind-the-scenes activity, as far as the process of commissioning, composing and publishing of particular works was concerned, but also shows the activities of J. & W. Chester’s and Wilhelm Hansen’s managing directors and their assistants that were connected with laborious preparations of the premieres, including the choice of performers and the dates of Lutosławski’s concerts, not to mention such details as booking hotels, planning his rehearsals, and – last but not least – negotiating the amount of his fees. All of these letters, unpublished until now, constitute first-hand source material, which splendidly supplements the knowledge on Lutosławski presented in existing monographs, and will be, as one may expect, an invaluable help in preparing a detailed account of his life and work.

ZBIGNIEW SKOWRON is a Professor at the Institute of Musicology at the University of Warsaw and the editor of Lutosławski Studies (Oxford, 2001) and of Lutosławski on Music (Lanham, Maryland, 2007).